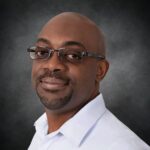 Brevard Nelson is the Co-Founder & CEO of Caribbean Ideas Synapse, a company dedicated to helping Caribbean organizations and leaders build more successful and impactful businesses in today’s global, technology-driven world, through the power of technology and modern marketing approaches.

Brevard has a unique blend of marketing and corporate communications talent, web development and IT expertise, seasoned with an entrepreneurial spirit.  Before moving into full-time work at Caribbean Ideas Limited, he functioned for over 10 years in various roles within the Guardian Holdings Group, culminating as Group Corporate Communications Manager.

In his professional career he also served as VP of Branding and Visual Communications on the Board of the International Association of Business Communicators – T&T Chapter, where his white paper on how Caribbean Businesses can add digital media to their marketing mix, was published in IABC’s international, award winning publication, Communication World.

In 2001, his passion for technology led him to start his first web development business but in 2007 his entrepreneurial journey would accelerate exponentially when he co-founded Caribbean Ideas Ltd with his high school friend.  Caribbean Ideas has gone on to serve many blue-chip regional and international business and win multiple awards including Addys, Hidden Champion award by the IDB and Korean EXIM Bank, Service Provider of the year award 2015 by TTCSI.

No stranger to the stage, Brevard has a love for music and dance and has graced the Queens Hall stage performing in some local musicals as well as captured a few titles in the Corporate arena including 3 time Soca & Chutney Monarch at Guardian Group. He is also co-owner and Director of Rosemand’s Academy of the Performing Arts that helps children and young adults build confidence and unlock their full potential through the performing arts.

In addition to his professional work, Brevard is passionate about giving back, specifically in ways that impact Youth and develop the Caribbean, and has served in multiple roles on the executive of the St. Mary’s College Past Students’ Union (currently in his third year serving as President) and was the founding President of the Community-based Rotaract club of St. Augustine West.  He is also the Founder of a Non-Profit organization that is focused on unlocking the potential young people via education and technology.

Brevard completed an Executive Education Programme at the Harvard Business School and holds a Masters Degree in International Marketing Communications from the London Metropolitan University and a Masters in Management from the ESCEM Business School in France. He also holds an undergraduate Business degree from the University of the West Indies.