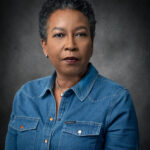 Julie Harris, Strategic Planning Director and Head of Creative Services at Lonsdale Saatchi & Saatchi, is a theatre person. She is also a writer, musician, educator and, of course, advertising strategist. But when you think of all the elements that define the best creative advertising, you see how similar they are to the stage business. Her passion for both is hardly a coincidence.

Born in Jamaica, Julie considered life as an academic historian and—understandably—fled to McCann Erickson where she began her ad life in 1985. There, as a Copywriter, Creative Group head and Associate Creative Director, she worked on some of Jamaica’s and the Anglophone Caribbean’s most prestigious accounts. After 11 years, she joined CGR Communications, which was at the time the Saatchi & Saatchi affiliate in Jamaica.

Julie has been a part of the Lonsdale team since 1999, after coming to Trinidad and Tobago on a two-year sabbatical from advertising to focus on her writing and theatre pursuits. Twenty-two years later, she is still here, having served in multiple capacities from Creative Director to Company Director, with her fervor for the advertising business undiminished.

Her greatest skills lie in the subtle arts: nuance, canniness, intellectual dexterity, and a deep animosity towards the cliché.

She has been recognized and awarded for her work in musical theatre in both Jamaica and Trinidad and Tobago. Ditto advertising awards. She has been an adjunct lecturer at COSTAATT for the past eight years, primarily teaching copywriting and principles of advertising to communications and graphic design students in pursuit of associate and bachelor’s degrees.